Bungee Mummy is a type of game that comes on very strong and continues to build up its momentum. As a platformer game that combines action with a need for a quick mind, this mobile device app certainly intrigues from the first moment a person tries it. But, it does not only this but also makes its gameplay so interesting that is simply beckoning the player to continue to have fun with it. This is not only exciting for the players, but also a great way to keep the mind active and busy.

Produced by the Steampunk Wizards, the game’s basic concept represents the main character of a mummy in the form of a ball, who needs to navigate a series of levels, full of a great sense of challenge and excitement, so that it can save its Geemies, cute creatures imprisoned in the landscape of the ancient Egypt. In it, the players control their avatar with a very intuitive system based on swipes, taps, flicks, and pulls, all of which are designed to provide them with a sense of precise movement, but also a system that will not turn anyone away. With this UI and its versatile movements, the mummy ball can jump, swing, bungee release and do much more in the challenging arenas that come one after another. 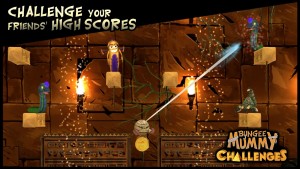 The game is a thrill to play from the moment anyone tries to clear the first arena and the first challenge. The graphics environment, defined in the 3D system that gives it depth and great architectural structure, is just brilliant for any action game, but especially for a mobile device app. The game also includes a lot of features. It does not demand a Wi-Fi connection to be played, providing it with a feature of players being able to enjoy it anywhere. The game features a series of adversaries, including snakes, scorpions and other creatures of the Egyptian desert. The Dual Score challenge feature allows the players to compete for a place on the global leaderboard and show everyone they are the kings of Bungee Mummy. 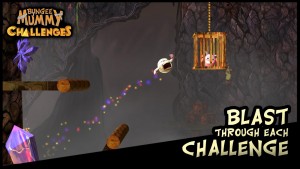 In spite of all these excellent features, the element which really set this game from its competitors is its four completely different game modes and distinctive challenges. The Bungee Blast launches the character through the cages in the effort to save as many Geemies as possible. The Snake Smash call for the destruction of snakes and scorpions and the Crate Escape asks for precision when the players need to drop crates into mining carts below. Finally, Wheel of Misfortune calls for the survival of the grim structure where collecting scarabs is the top priority. All of these challenges are distinct and provide a breath of fresh air in the domain of arcade games.

Full of innovative mechanics and a rich graphics style, the Bungee Mummy: Challenges is an app that rarely comes about. This is why this app should be taken advantage by all those who love great mobile device games.