Survival games are part of a solid genre in the game industry. It is a genre that is not without creative developers, so it is no surprise that, every now and then, a real gem of a survival game hits the Play Store. Last Horizon is one such game; a game that combines space survival and terraforming concepts, with a tinge of the apocalypse thrown in the mix.

In Last Horizon, you take control of a free—wheeling spaceship; the last of your kind tasked to preserve your civilization by finding a new habitable planet. To do this, you have to land on every planet that you encounter on your journey and harvest its ore and oxygen resources (and rescue humans if you ever happen to find some). These resources are necessary for the terraforming of the world that you intend to make your new home (if you do find a planet with the right conditions, that is). 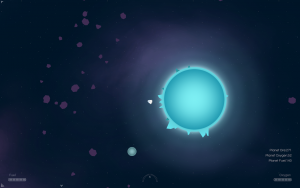 But, you have to be wary of various sentient alien beings that inhabit some planets, though, because some of them won’t take the harvesting of their home’s resources lightly. Once provoked, let’s just say that they would do all in their power to cut your trip short. The survival aspect doesn’t there, though. You also have to watch your fuel gauge every now and then because once completely depleted, it’s game over. What’s good is that fuel can also be replenished in every planet that you land on.

How you control your ship is also a key factor of your survival as hitting a mountain or a group of asteroids, or plunging head on to a star or black hole could also promptly result to your death. Equal care should be given when landing on a planet. 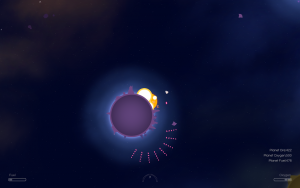 The game has 4 game modes: Flights A, B, C, and X. Each of these modes determines the position of the planets in every playthrough. The first three flights have planetary positions that do not deviate too much from each other. Flight X, on the other hand, has randomized arrangements of planets. That every playthrough is procedurally generated only adds to its freshness and unpredictability. Lastly, the meditative music also fits the game very much.

The graphics of the game calls to mind the classic visual look of most arcade games, but, of course, with imagery that doesn’t fully depart from most modern mobile arcade games. Elegant and minimal, indeed. Last Horizon has the same control concept as the classic game Asteroids and has similar concepts of survival in such games as Out There. Looking at the bigger picture, though, Last Horizon is obviously a game that has a wholly original concept. What it is, is a masterful combination of the said games‘ most basic concepts. And, the result is astrologically outstanding, to say the least.