Lion Chief: Leap and Pounce Your Way Through the Jungle and Declare Yourself Its King

In the jungle, you largely have to rely on your instincts and wild side to ensure your survival. Your primeval impulses kick in, you are driven to hunt for food and there is always that strong urge to prove your strength – to rule over lesser creatures. Lion Chief could not have depicted these wild instincts better, as in this Android app, you take the role of a wild lion, rampaging through the jungle, literally eating anything that comes your way – from luscious red meat to whole, live prey like rabbits! 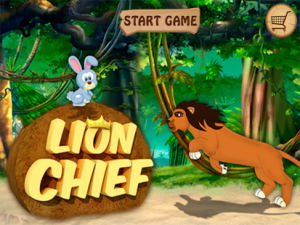 Being the King of the Jungle doesn’t make you unsusceptible to traps set by hunters, though. Cages and other obstacles also abound, waiting to capture you, or worse, have your prized feline hide! And, what a fine trophy you’d make, indeed, if you can eat as many meat as you can, every piece serving to fuel your insatiable hunger more!

The controls of the app are as simple as its entire concept. It is a side-scrolling runner game, so you have no control over how fast you progress. If you want to jump over obstacles or reach food placed on elevated ledges to score points, you only to tap the screen. You can double-tap to double-jump or extend your time in the air. Each time you eat a piece of meat or live prey, you are given points. See how high you can score and if you can beat your previous record.

There are many apps in the app store whose features and controls are so simple that many people would undoubtedly find them banal and mediocre. What makes Lion Chief different is that it is one of those rare games which can get its users hooked in an instant due to its simple, yet original features and concepts (think Flappy Bird). 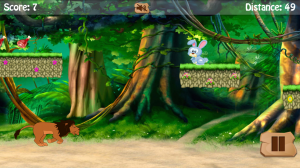 It may not have the sophistication (feature-wise) of games of its kind such as Jetpack Joyride, but it is its very simplicity which serves to highlight its appeal. That being said, Lion Chief is, indeed, the perfect game to pass the time; all the better if you can play it with your friends. It is very accessible, and if it so happens that you and your friends have a knack to issue game challenges every so often, then you would undoubtedly agree that this app would make a great competitive platform.

It is because of this that it can be surmised that this had been the intention of its developer from the outset. To create a minimalist game that can be enjoyed anywhere and can be used to show off one’s skills. In this light, Lion Chief really succeeds and shows potential to become a popular game.