Lucky Best Buy, they get to be the first to see and have the very long awaited Gingerbread tablet that was made by Taiwanese manufacturers. If you want to be one among the very first owners of the HTC Flyer, then hurry for its is available on Best Buy’s website for $499.99. 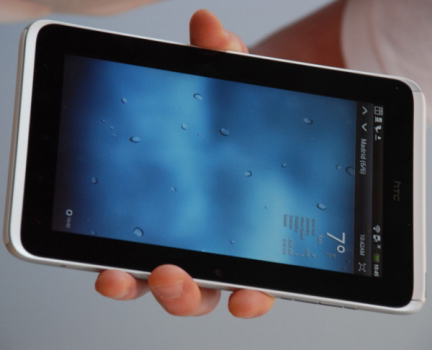 Most probably T-Mobile would be getting into links with the device as well, as the device supports HSPA/WCDMA AWS/2100 MHz and Quad-band GSM/GPRS/EDGE at 1800/1900 MGz. According to the whispers that are going around, many users are planing on trading their old Tablets for the Flyer, anticipating that they could soon expect Honeycomb on their Flyers really soon.

The major part of the Tablet, that makes it stand out from many of its kind that is available is that, its the first Sense UI tablet that is capable of having Gingerbread 2.3, and could continue to remain a Sense UI tablet even after they have Honeycomb updated to it. Added to this to make things even more exciting, the tablet comes with a “stylus”, which is a device that helps you to write, draw, take notes and highlight items, thanks to the HTC Scribe technology .

With all its advantages, we still hope that the device also comes equipped with the new HTC Sense 3.0 when being launched. With all the information received on the Flyer, about the skin requiring a dual-core chip because of its CPU intensive nature and then its “hardware limitations”, the Flyer still has a chance of survival with its 1.5 GHz processor which would make it worth while.