Motorola Photon 4G was launched last week and is seen as the best of Motorola’s Android phones. This high-end device is the company’s first 4G handset on Sprint. Let me explain what I got to know with a hands-on-experience with this device. 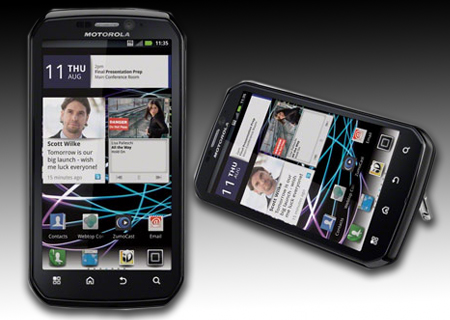 Positives: Photo 4G has a rock solid hardware and without doubt it is an absolute Android powerhouse. The camera can help in 720p HD video capture and 1080p HD video playback. The angled edges make it look futuristic. The kickstand, call quality and the overall performance look great. Having micro-USB on the upper left makes it a bit easy to use the phone while charging as the cable doesn’t really get in the way when users hold the phone.

rel=“nofollow”>Negatives: The large, bulky design of the phone might not attract many users. At 158g, Photon 4G is a little heavy and with a 12.2mm thickness, it is significantly thicker than many of the Android smartphones. The photo quality of the 8MP camera should produce better images and I think a phone at this level deserves a better battery than the 1,700 mAh.

Conclusion: Motorola Photon 4G sports graphics and images in vibrant colors and everything looks nice and sharp. The Gorilla glass display is scratch-resistant and has glare-reducing coating that makes it usable even under the bright sunlight. The dual-core Nvidia Tegra chipset makes the touchscreen remarkably responsive. The connectivity is great, the hardware is solid and the software serves its purpose. Even though it is not a groundbreaking device, Photon 4G is the best Android device that Sprint offers today.