If Price Is An Issue, You’re in Luck

Microsoft’s newest entrant in the low-cost phone market, the Lumia 430, comes just months after the release of the 435. So what is the difference between the two, if any? On the one hand, there are differences, but on the other, there aren’t many of them. Both have virtually identical hardware specs, whether it be for the display, the processor, memory size, and many, many more similarities, so the most striking difference to begin with is the price. Both are low cost phones, with the Lumia 435 averaging about $85 and the Lumia 430 going for about $70. This is not a huge price gulf, to be honest, but because the phone is geared toward the budget-conscious market, the lower price point can make a huge difference for those looking to save money. 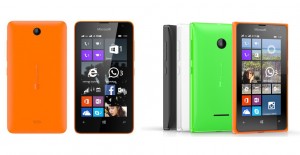 Another difference is largely cosmetic: the Lumia 435 is slightly heavier and slightly larger. The color palette for the phones are not exactly the same either: the Lumia 435 comes in a variety of four colors (orange, green, white, and black) whereas the 430 only comes in orange and black. The battery life is very slightly different, with the Lumia 430 having a 1500 mAh battery as opposed to the Lumia 435’s 1560 mAh battery.

Conclusion: While both phones are aimed at the budget conscious, the differences between the Lumia 435 and Lumia 430 are so slight that you’re best off buying whichever one the store has a special on that day. Both phones apparently have excellent value for the price.