According to a recent report released by a tech market research company, Google’s Android operating system has taken the top spot as the most popular mobile operating system in Britain. It has increased its share to 48.5% which was 37.8% a year ago.

Kantar WorldPanel Com Tech recently unveiled a report regarding UK smartphones. The analysis covered 12 weeks of smartphone data upto 19th February 2012. The report claimed that Android phones comprised 48.5% of smartphones sold. Apple saw a 6% increase in its market share to reach 28.7% this time. It retained the second position. Windows 7 had a 2% increase in its market share from 0.5% in 2011. The sales of Nokia Lumia 800 might be the reason behind the increased value. 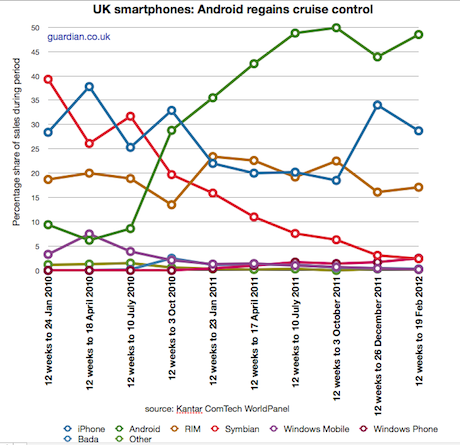 On the other hand, Symbian lost 10% of its sharet and reached 2.4%. BlackBerry also lost 7.3% of its market share and reached 17.1%. The analysis also revealed that 51.3% of the British population owns a smartphone at present.

Kantar Com Tech gathered data from a wide panel of 15,000 people in UK who are polled regularly on the devices they use.