According to Distimo, Android Market app count has crossed 400,000 mark.

Distimo, a metric firm specializing in mobile application stores, said that Android Market app catalog hit 400,000 benchmark over the New Year’s weekend. From 300,000 apps, it took 2 months for the Market to reach 400,000 apps. Distimo’s count only includes the active applications and does not include any apps that may have been recently removed. 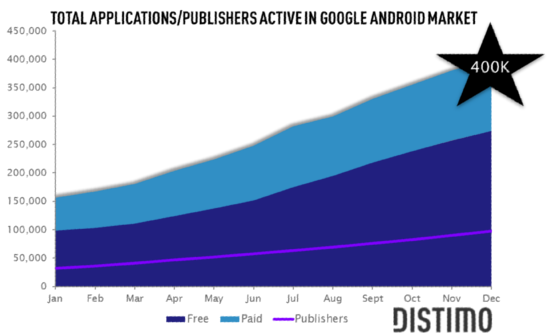 The free apps seem to boost the app count in the Android market. “The main contributors to reach this milestone are free applications. Roughly, 2/3 of the available applications are free in Android Market. The percentage of free applications has steadily grown month over month from 60% in April 2011 to 68% free content at the end of 2011,” reports Distimo.

Apps Sale: A Repository of Tons of Promo Codes for Paid and Premium App