According to the latest report by comScore rel=“nofollow”>, Amazon’s Kindle Fire accounted for half of the Android tablet market grabbing more than 54% of the market share as of February 2012. Kindle Fire has become the leading Android tablet in the U.S. in just five months since its release.

“Within the Android tablet market, Kindle Fire has almost doubled its share in the past two months from 29.4% share in December 2011 to 54.4% share in February 2012, already establishing itself as the leading Android tablet by a wide margin.” reported comScore yesterday. 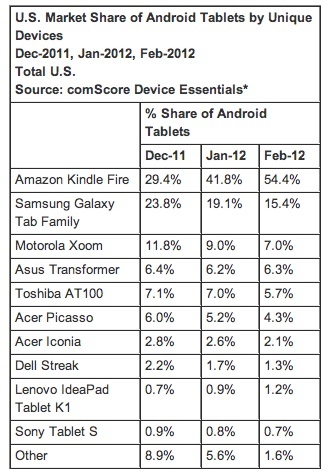 Samsung’s Galaxy Tab secured the second position holding 15.4% of the total market share. It was followed by Motorola’s Xoom with a 7% share. The Asus Transformer and Toshiba AT100 secured the fourth and fifth places with 6.3% and 5.7% market share respectively.

Sarah Radwanick of comScore said, “With Amazon’s well-known brand name, marketing muscle and widely used distribution channel, it’s not surprising to see the Kindle Fire take a leadership position in the Android tablet market. What is impressive is that it reached this position so quickly after its debut.”

Kindle Fire rel=“nofollow”>, released in November 2011 comes with a price tag of just $199. This could be a reason for its popularity.

Silk Browser Can be Installed in any Android Device