Samsung Galaxy Chat has a 3-inch capacitive touchscreen with QVGA 240 x 320 pixels resolution and sports a QWERTY keyboard set right below the display. The uncommon design is mainly to attract teens and social networkers. The smartphone comes preloaded with Samsung’s ChatOn instant messenger, which allows users to message and group chat with text, animations and images. There is a dedicated button in the keypad to launch the service. 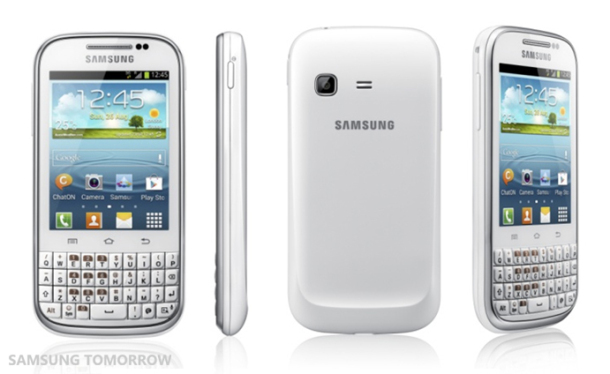 The device runs on Android 4.0 ICS operating system. It has a 2 MP rear-facing camera, 4 GB of built in storage and a slot for a microSD card. It supports USB 2.0, Wi-Fi and Bluetooth 3.0 for connectivity. It also comes with a 1200 mAh battery which can offer up to 14 hours and 40 minutes of talktime and up to 520 hours of standby time. The device also lets users access variety of games through a Game Hub.

Samsung stated in a blog post, “The Samsung GALAXY Chat sports a sleek and compact design that complements your style. Navigating the phone’s app menus is a breeze with more visual icons incorporating 3D effects, a fully customizable Favorites tray, and widgets that you can resize or reposition according to your preferences.”

The phone will initially be available in Spain later this month and gradually rolled out to Europe, Latin America, Middle East, China, SouthEast Asia and Southwest Asia over the coming months. The pricing of the phone is not yet revealed.