Samsung Mobile has just released an official ‘Unpacked 2012‘ app for Android devices, in Google Play. This app would help Android users keep up on the happenings of the Samsung Galaxy S3 launch in London which is scheduled for May 3, 2012. Earlier yesterday, Samsung unveiled the Unpacked 2012 teaser video on YouTube to promote its upcoming launch event. 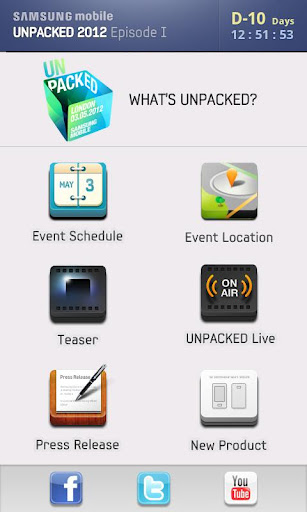 One of the most amazing features of the app is that it lets users watch the launch event virtually in real time. Users can watch the launch of Galaxy S3 live from anywhere in the world. The app also consists of the new product’s details, an official press release, event schedule, event location and teaser video.

There is also an Unpacked Live option using which users can stream the video of the launching event and replay it afterwards. Unpacked Live will only be available during the event. The Press release and New product options will be available after the launch event. Samsung has also added a countdown timer at the upper right corner of the app to remind users of the time left for the event.

The event starts at 7 pm on May 3rd in London. The Unpacked 2012 app can be downloaded from the Google Play store.