All In One Islamic Guide+Quran: The Ultimate Islamic Reference App

It is a fascinating notion that religion is beginning to adapt to this modern and fast-paced era by taking advantage of one of this generation’s primary facets: technology. There are many religious apps that are available for download in the Google Play Store and the Apple App Store; although, some were banned from the latter. Even so, many of them are just well-meaning apps that seek to spread the vital teachings of the religion that they are espousing.

Even if religious apps are enjoying a robust proliferation, there are still comparatively fewer apps, which serve as a general guide to Islam and its daily practices. All In One Islamic Guide+Quran seeks to address this by serving as a practical guide and source of information, not only for its practitioners but also for people who wish to learn more about one of the most influential religions in the world.

Firstly, the app’s design has characteristics which fit the religion that it seeks to promote: simple but possesses a quiet dignity. Its background image of Arabic markings and inscriptions, with golden rays of light pouring in really serve to highlight this fact. But, of course, what really makes this app stand out is the wealth of information that it provides.

In the Learning Quran’ tab, for instance, uninitiated persons would learn a lot about the Quran, made easier by the app’s built-in translator. Further subdivisions in this tab include Quran Words, which has elaborate information about the Quran; Quran Quiz Activity, which you can do if you want to test yourself after reading; Read Quran, if you simply want to read a surah or verse from the book; and Surahs Recitation, which serves as a guide on the proper recitation of Quran chapters. 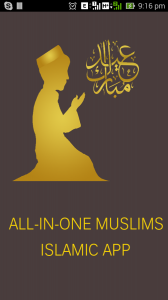 In the Prayer Timings’ tab, on the other hand, you can set the times for each of the major daily Islamic prayers; this way, you’ll always be in the know of your prayer schedules. Next to it is the Islamic Events’ tab, which is where all the major Islamic events are listed, along with their exact dates.

The app also has a Nearby Mosques’ tab, which essentially finds the closest places of worship for you based on your current location. You can set your location in the Settings’ tab, where you can also do date conversion and change timing settings.

Compared to other apps, there are a lot of other Islamic apps in the Play Store, which really focus on serving as Quran references or salat guides. However, very few have ever done what All In One Islamic Guide+Quran has done, which is to compile into a single useful app not only Islamic lore but also complete guides of its regular rites. With Islam as a religion that requires its practitioners strictly adhering to daily religious duties considered, this app one is certainly one practical app to have for Muslims everywhere.

In conclusion, whether you are a newly-converted Muslim and still need to brush up on your Quran or a long-time practitioner of this major religion, the All In One Islamic Guide+Quran is one app that you probably won’t think twice to get. If you are simply curious about this religion and want a platform from which you can easily get information about Islam and how its spiritual ceremonies and practices are done, then know that this app surely won’t disappoint.