‘Wacko!’, ‘What’s eating you?’, ‘You’re toast!’…….. You may have come across expressions of this kind when your teen-aged daughter or son is having a conversation with his/her friends. And if you have tried to figure out what they mean, you may have discovered to your surprise that they are slang and their actual meanings are almost completely different from their literal meanings. Moreover, you must have wondered how your kid has a different expression for each situation, and try as you may, it is quite difficult to figure that out. Here is an interesting Android app named ‘American Slang’ to give you a better understanding of slang, its meanings and usage. 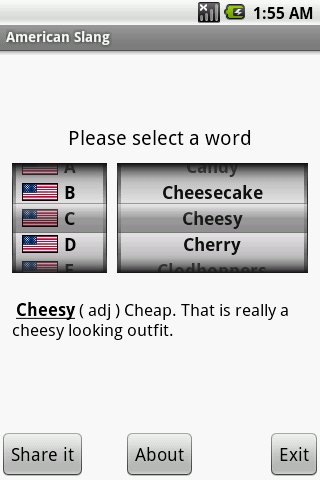 There are some words of American origin that are now commonly used worldwide. But there are many others which we come across in recent times that leave us feeling totally puzzled. Not only is it hard to understand what they mean, but it is equally challenging to remember them and use them at the right time. American Slang lists more than 100 words/expressions in alphabetical order with their meanings.

The slang expressions are listed with their part of speech and meaning, which will help you increase your slang vocabulary. The most beneficial feature of this app is that it also provides an example to give you a clear explanation of the usage of slang words/expressions in the right place, thereby making your learning more effective.

When I started using American Slang, I came across many expressions which I was seeing for the first time. For instance, I learned that ‘in your lunch’ means being nosy, ‘applesauce’ means nonsense, ‘ends’ refers to money, ‘mutt’ refers to a dog, ‘rents’ means parents, ‘zip’ means nothing and ‘wheel’ refers to an important person. These expressions were initially mind-boggling, but as I went on I got the hang of them.

American Slang is an app that teens would also enjoy, to learn some cool new expressions and show off their slang vocabulary. The most-exciting feature of the app is that you can use it to share the expressions on social media and help people who are finding it difficult to understand them. The collection of expressions in this app can be expanded, as it is quite limited at present. Apart from this, the app is a perfect tool to learn slang.

The app is free and requires an Android version of 1.6 and above.