Are you looking for a different kind of Android game which you could play during your leisure time? If so, here’s an exciting one named ‘BugKing’ to help you unwind after a tiring day.

BugKing is a casual Android game, which you can play when you need a break from the usual puzzle and action sort of games. The game is really fun and addictive.

The plot of the game is simple. All of you must have heard terms like army, base and enemies in the military context. Well, this game is all about conquering bases by defeating your enemies (in the kingdom of bugs, of course!).

BugKing consists of three difficulty modes: Easy, Normal and Hard. There are so many levels under each mode and each of them have different structures and layouts. Before entering the game, you will be shown various Base Types and Base colors in order to help you differentiate your base from the ones of your enemies when you play.

The primary motive is to conquer all the enemy bases to clear a level. You can touch your base and drag it to an adjacent base to dispatch army units. In case there is a bunch of enemies marching towards your base, you can attack all of them at the same time using skills. There is an active skill icon on the screen which you can touch and drag to the desired spot to use the skill. But remember, you can use the skill only when the skill gauge is full. 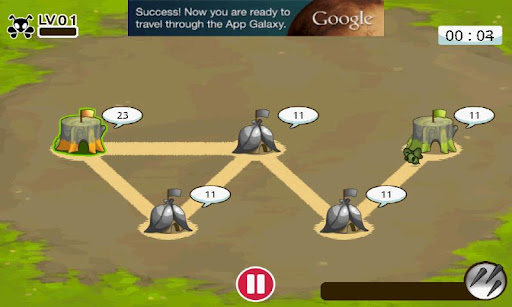 Once a level gets completed, your statistics of that level will be displayed. You can view the number of killed and lost bugs. In order to improve your army units, Attack Strength, Productivity and Movement Speed bonuses can be utilized, when you reach a new level. You could strengthen your army base by choosing any of the options.

BugKing has a well-defined interface and appealing graphical elements. The colorful bugs that march towards the army bases throughout the game are simply captivating. Moreover, the navigation controls are simple enough for anyone to move easily over the screen.

The game would be better if there were some on-screen directions to guide us in making moves to attack enemies, at least in the initial levels.

BugKing app has a paid and free version. The paid version does not have any advertisements and costs $1.86. The app requires an Android version of 2.0.1 and above.