Have you ever wanted to have an instant way with which you can tell whether your friends are lying to you or not? Who among us, for at least once in our lives, hasn’t had that urge to know if the person we are talking to is telling the truth? Alas, the dream of a genuine, portable lie detector app is still probably a long way off from being realized. And, if does get invented, would we really want it? Wouldn’t it be better if it just comes in the form of a prank app?

Indeed, nothing parodies the lie detector app (or any other means of detecting lies for that matter) than Lie Detector Prank-Fingerprint. The app, designed by App Appa, is very straightforward, to say the least. It lets you scan the fingerprint of your friends, analyzes it, then tells you whether he is lying to you or not. 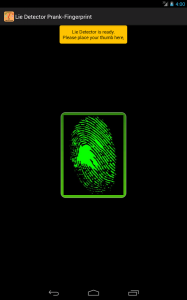 He only needs to place his thumb on the built-in scanner, which is highlighted by a green frame. The placed thumb will have an equally green hue once it has been fully scanned. Afterwards, the app will proceed to analyze it, with moving green wave patterns simulating the act. Once done, a thumbs up or thumbs down icon will appear corresponding to truth or falseness respectively.

What sets it apart from other lie detector apps from the App Store and Play Store are its overall interface, design, and ease of use. There is also the function of immediately sharing your results with your friends online, which only serves to let you easily engage more of your friends and acquaintances with this joke app. 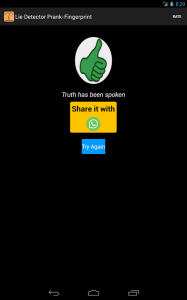 One evident advantage of this app is that it can be used on various instances and scenarios in your daily life. And, whether you choose to believe what the app tells you or not really doesn’t matter because Lie Detector Prank-Fingerprint is not so much about identifying the truth or lie in your friends’ statements as having fun while using the app (albeit in a manner that is rather unconventional.)

And, it is this deviation that inevitably makes the app work, as it brings something new to today’s modern, mobile entertainment table. It plays with human beings’ innate curiosity to know what is bogus and what is not, making it a must-have joke app when you are simply hanging out with your friends, especially if you and your buddies have a tendency to prank each other from time to time.