The gaming app of Planes Control captures the full extent of the thrilling feeling which comes from working as an Air Traffic Controller. Many films, books, and TV shows have already presented the many interesting aspects of this unusual job, but now, thanks to the game app called Planes Control, anybody can receive the rush of safely guiding planes on an airstrip. Aside from this, the game provides its players with a multitude of scenarios, real aircraft and much more. 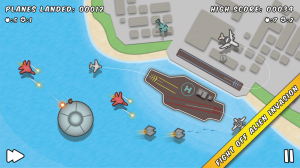 The game was made by the Rarepixels development team and was created for all mobile devices, which operate using the Android operating system version 3.0, or up. In the game, the main concept represents a line-drawing mechanic that is used by the players to safely ground all incoming aircraft to the airfield under their control. Even though it appears as a simple task at first, soon enough the Planes Control shows off its abundance of great game design, well-crafted scenarios, situations, and additional elements that can turn even the shortest gaming session into an extremely exciting experience.

The game features a complex web of different features while at the same time it elegantly avoids any issues with usability or its learning curve (which is very approachable and simple). The game features include collisions, tornadoes, forest fires, and storms that all need to be avoided but also throws in alien invasions and formations of enemy fighters. The controls feature not just the landing of the planes, but also the ability to attack incoming fighters. To keep the users interested, the game provides the feature of new challenges and new levels every day while providing the app without any ads whatsoever. 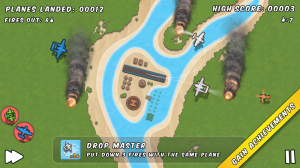 But, the thing, which really sets the game apart from any other similar Android release, is its attention to detail. In the game, players will include almost every modern plane out there, starting with airliners, jets, helicopters and tilt-rotor aircraft. These are the real-life Antonov 225, Apache AH-64, SR-71 Black Bird and F-14 Tomcat. With them, players will fly each of these planes on missions like cargo runs, air tanking, aerial combat, holiday routes, storm and tornado landings, navigation of canyons, night approaches and landings, emergency flights and stopping forest fires from spreading. Because of this, the combination of real planes and engaging missions makes every Planes Control level a fun-packed ride from the first moment to the last.

When all advantages of this Android game are taken into consideration, there is no doubt that it provides a fantastic gaming experience. Unlike other similar games, it shows no ads or other distraction, and its features and real plane models make gaming interesting and visually appealing. Thanks to all these facts, the same app can really be called one of the best plane landing games on the market.