During my childhood days, I used to read a lot of comics in which aliens were the main characters. The hero’s part would be to destroy the aliens and bugs and protect the planet. Well, Alien Devastation is one such app where the user is the hero of the game. The mission of the game is to kill all the aliens of the universe with your UFOs. 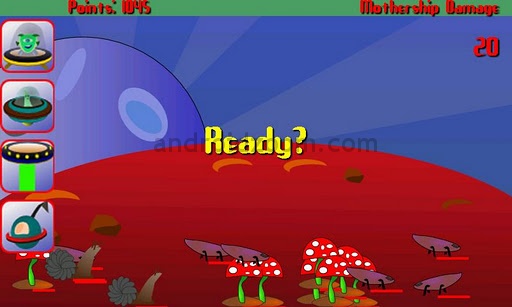 Alien Devastation is an interesting game. Initially, you can choose a planet you would like to target. There are many levels in this game and the difficulty of the game increases as you complete a stage and go on to the next.

The first stage is very simple and easy to finish. You can use four types of attacks to destroy the bugs. You can select anything from Laser UFOs, Shooting UFOs, Mothership UFOs and Kamikaze UFOs.

I launched the Mothership UFO option and started my play. Having destroyed all the bugs, I imagined myself to be the hero of a comic story. I completed the first level in no time. After a complete wipe out of the planet, various options for improving the attacks are provided. That is, the attack can be upgraded to a stronger level. Lower recharge time can be chosen and many other suitable options can be selected. Based on the usage of these improvement options, you can play a better game in the next stage. One of the things to be noted is that bugs too can shoot your UFOs. So you can use a barrier to protect your UFOs while playing.

As I advanced further, the stages were really challenging and it was difficult for me to complete them. I was engrossed in the game during my play. This game is really fantastic as it has many colorful planets to target and a wide range of aliens and bugs that you can target. The game has an attractive graphical display with well-organized stages.

This app is a product of ‘Synchdroid’ and it is a free version. It is compatible with an Android version of 1.6 and above.

So, is anyone out there ready to destroy gruesome aliens and bugs right now?