Isopod – Use Roly Poly to Save Insects from Spiders

Quite often you must have seen people killing insects without a second thought. Have you ever thought of rescuing them? Here is a gaming app named Isopod in which you can save insects instead of squashing them. Each of the insects has got its own story, written by entomologists, biologists, teachers and researchers. This is a fast-paced, interesting app that explains a number of life science concepts. 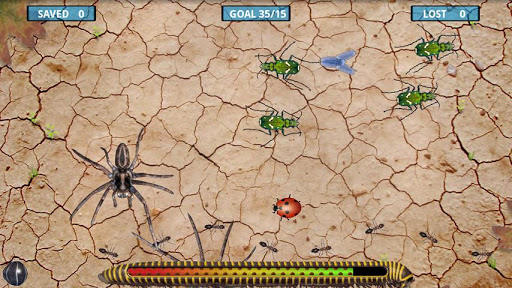 What’s the app about?

Isopod is an educational, science app with which kids in elementary school can play and learn about various insects. The app features an Isopod that rolls around to bump into various creatures. You must tilt the device to help the beetles survive. When you bump on the beetles, they start flying. Once you complete a level, a new topic page opens to educate you about various insects.

Working of the app:

The app has got 4 different environments – ‘Santa Cruz, California, USA’ , ‘Cape Town, South Africa’ , ‘Brisbane, Queensland, Australia’ and ‘Sierra Nevada, California, USA’. Each environment covers 6 topics, adding to a total of 24 along with the glossary list and discussion topics.

The gameplay of Isopod is pretty simple. When the Roly Poly bug enters the play area, it rolls up like a little ball. All you have to do is make use of the device’s accelerometer to make it roll. You can bump into insects that are special power-ups, but you must avoid those which may ruin your health. Your task is to save as many beetles as you can, before the spiders hunt them down. Just bump into the beetles to make them fly away from the spiders. If you accidentally bump into a spider or tiny Argentine ants they will ruin your health and make you lose your life. Once you complete a level, you can unlock information about insects like the Ohlone Tiger beetle, Wolf spider and much more. You can find the health meter at the bottom of the screen. The number of insects you have saved and lost are displayed at the top. 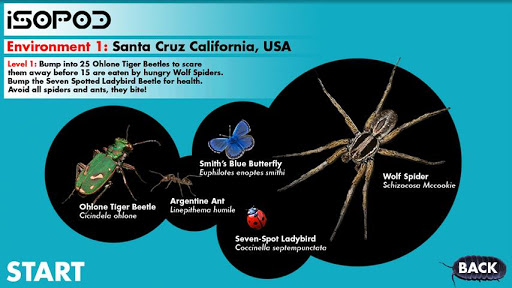 Features of the app:

The sound effects in the app are perfectly in line with its theme. The app has got wonderful graphics. The trivia displayed after the completion of each level is really interesting. There is a wealth of information on every page with small images and beautiful high-resolution photos. The audio option reads aloud the information and makes you feel like you are watching a TV program.

Isopod provides a link to the app’s Pinterest board that covers various topics on insects in detail. The app also includes a free download of 60 pages of puzzles, quizzes, coloring, hands-on activities and much more. The Teacher’s version of the app, which is available as an in-app purchase, has all the levels unlocked. I felt that the gameplay would have been more enjoyable if you were allowed to use your fingers to move Roly Poly, instead of the tilt mechanism.

Isopod is a perfect game-cum-educational tool that is bound to attract children and adults. It costs $1.99 and requires Android 2.3.3 or later versions. The Teacher’s version of Isopod is available for $2.99 with all levels unlocked.

Take a Trip to Space with a 3D Orrery App