Mobile phones are a boon to many, but not to all – thanks to bullying. It is rampant these days as bullies attempt all its varieties to threaten people. Cyberbullying is said to be the latest and the worst among them. An Android app promises to save users and their family from bullying.

Among all those games and utility apps, Bully Block is an app that attempts to help for users safety. As the name suggests this app blocks all the bullies from cont 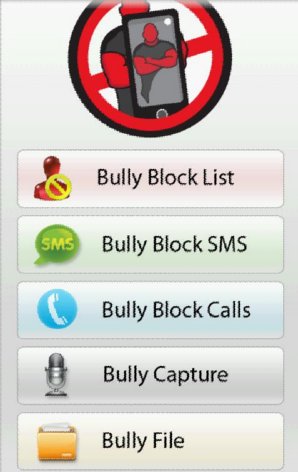 Users can add numbers to the Bully Block List to block unwanted callers and texters. When black-listed people call users, they can make those bullies hear a busy signal or a pre-recorded message. Users can also go into stealth mode and secretly record the bully while he or she is taking on the phone. These audio files will help if they want to save it as an evidence and forward it to appropriate authorities. In addition to that, Bully File’s downloaded audio can be used to authenticate the voice during legal proceedings.

rel=“nofollow”>If the developers of Bully Block can rework on the user interface, this app will look a bit more impressive. As many apps of this kind are available for free, the UI designs can play a huge part in attracting users. This app costs US $1.29 and is clearly not for everyone. It is worth buying, if you feel any threat to you or your family. The current version 1.2 requires Android 2.1 or up.