Show off Your Creativity with YouBubbs

Remember the comics you used to read in your good old school days? The ones with little pictures that explain stories within speech bubbles. Do you want to create a comic of that sort to have some mild-mannered fun with your friends? Or would you like to freeze a funny saying which your friend just blurted out? If so, then try out the amazing YouBubbs app. 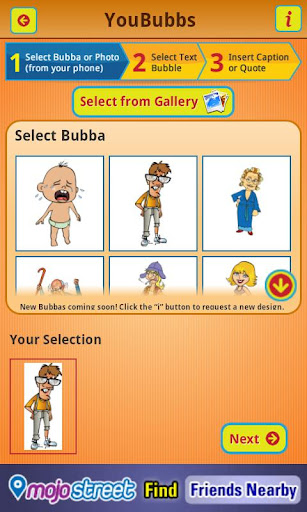 YouBubbs is an interesting Android app that is meant for capturing on-the-spot quotes or dialogs from daily conversations and putting them into speech bubbles along with the avatars.

The app offers a wide variety of options to create your own YouBubb. It consists of pre-defined avatars known as Bubbas. Each Bubba is different in its own way and I bet one would laugh when seeing the Bubbas for the very first time. I developed a special liking for the Lil’ Bubba.

You can either select a pre-defined Bubba or a photo from your gallery to create a new YouBubb. Once selected, you will be asked to pick up the suitable text bubble from the displayed options. You can then insert your desired caption or quote with respect to the selected Bubba. The final step in creation lets you arrange the image, text and the bubble according to specifications. That’s it! You have created your own YouBubb! 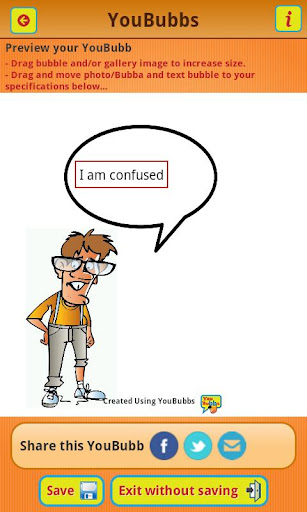 YouBubb is one of the most intuitive apps I’ve ever seen. It helps you sharpen your sense of humor by letting you create hilarious personalized memes. The easy-to-create steps allow anybody to play with it. It would be still better if the pre-defined avatars were animated (just to add more fun). I also noticed that the touch screen control did not work well while scrolling for the given Bubbas and the text bubbles. Other than that, YouBubbs is a great app for anyone who likes fun and humor.

The app is available for free in Google Play and it requires an Android version of 2.2 and above.