Here comes a fantastic app for photography, Lapse It-Time Lapse-Pro, a professional version from ‘Interactive Universe’. It is the best time lapse app I have ever seen. It enables us to capture astounding shots and make time lapse videos in our Android devices. 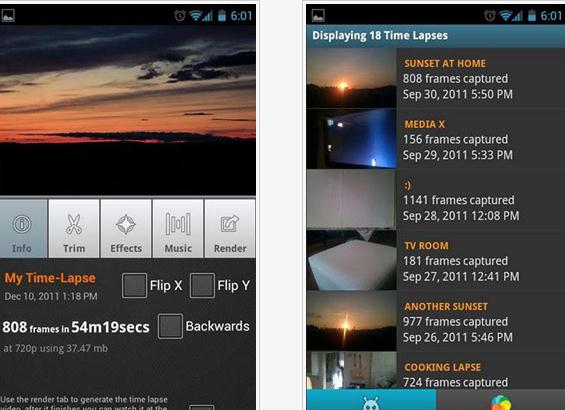 The sensational feature of this app is that multiple shots can be taken in a single click with a lapse in between each take. These shots can be merged together as a video to have a rocking and lively effect.

The app has an in-built camera shutter. Once you launch the app, the glossy main menu appears. On pressing the ‘New Capture’ button, the app’s camera function gets opened. You can set the interval and start capturing. The camera will keep on taking pictures until you press the stop button. Pictures can be captured at a maximum resolution of 720p. The frame rate can be set anywhere between 1 and 240 frames per second.

There are various options available for editing and adding effects. You can use suitable effects to make your pictures appealing. Then you can move on to the Render option. This app has a unique, robust fast rendering engine. Once the Render button is clicked, the shots are rendered as a video to MP4, MOV and FLV files. You can play the video to see the movements of your photos. You can give any name to your project while rendering. Images can be rendered as many times as you wish. There are also controls available for lighting adjustments and zoom. Sound tracks can also be added to your video.

The video can be shared with anyone via Facebook, YouTube, Google+ etc. An in-built Social Gallery is available through which the projects created by others can be viewed.

The interface is excellent and the navigation is easy throughout the application. The overall functionality of the application is good. The price of the Pro version is $ 1.99. I feel that it is a must-have app for anyone who is into the process of creating stunning time lapse videos. On the whole, this stuff is pretty cool to play with.

Volume Control Made Simple by Knobby