If you’re into remote desktop software for Windows and want to be able to have full control over your computer even when away from it, you can now do that using an Android app from your Android phone. You’ll be able to thus enjoy remote control of your keyboard, gamepad, multi-touch and mouse by using an Android tablet or smartphone. There are many functions you’ll enjoy when using Windows controller and some of them include: 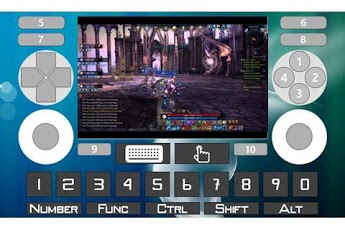 The operation of the software is done on the driver level. Not only that, but you’ll also be able to engage into multi touch operations which are supported by any version of Windows 7 and up. Also, in Windows 8, using the Physical Multi Touched Panel you can do operation stands comparison very easily.

Macro operations are very useful and because the app supports editbale macro buttons, you can perform a series of operations in a single touch. Windows Controller also supports the input of the standard buttons on the gamepad, that buttons and the input of sticks. This means you’re not limited to using a touch panel only, but the gamepad which is connected to the system itself.

The sound currently playing on your computer can be easily played back on the device. The audio codec used is CELT. WebM streaming is used for displaying the desktop on the cell phone and due to GPU rendering, GPU encoding and NDK encoding, the app shows its real potential in multi cored CPU and GPU systems. Speed can also be increased if you decide to install a mirror display driver in Windows.

Bluetooth is supported in addition to Wireless LAN. Power savings are very notable and users will absolutely love them. For more information on what this app can do, you should visit http://www.tnksoft.com/soft/phone/wincontroller/ .