Prsy: Time to Break Out of the Shadow of Social Media Apps and Go for Personalized Ones

Many of us have grown accustomed to relying on third-party platforms like social media (Facebook, Twitter, Instagram, etc.) and other messaging apps (Skype, Whatsapp) that it has become ingrained in our minds that they are the only means for us to develop our social presence online.

Admittedly, these are the platforms that served as catalysts, which launched the social media phenomenon that still permeates today. However, their users, even up to these present times, are never really able to fully optimize their profiles in a more personalized level. Prsy, although also categorized as a social network, seeks to remedy this by allowing their users to create their own social media apps, which would bear their own name and image. 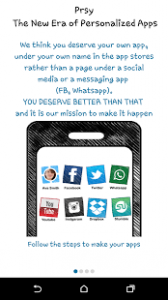 What Prsy is technically espousing are personalized apps. These are apps that have features that are similar to social media apps (photo, video, message, document, and music uploading and sharing). The only difference, of course, is that you are your own app, and not just part of a social media whole.

In short, everything would come from You and not the Facebook You. This level of customization is clearly unprecedented, to say the least, and unlocks a higher, more personalized way to interact with your friends and acquaintances. After all, Prsy makes it possible for users to share their created apps with each other. Even if this is the case, though, Prsy does not fully excise its support of the major social media platforms as you can share your own personalized app on Facebook, Twitter, Youtube, and others as well.

The icing on the cake is probably the fact that the app that you make out Prsy could be made available on app stores as well, making sharing and connectivity with others that much easier. Publishing your own app through Prsy is doubly easy, as you only need to fill out a form, then wait for the subsequent email and notification confirming your app’s submission to app stores. 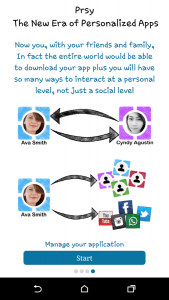 Prsy is obviously a complete contrast to other social media apps available today, as it is essentially encouraging users to prioritize their individuality rather than submit themselves to the conventional style of building up social network profiles. It is this very fact that ultimately makes it the better option, in that regard.

The app, when taken as a whole, is certainly not without appeal, especially for users who want to gain more favorable freedom in customizing their social media profiles and even make their own apps out of it. Only one thing is for certain, though, and it is that the conception and subsequent invention of Prsy only goes to show that people are beginning to want to highlight their online individuality more. This app is also available in Amazon Store.

Features of the App
Ease of Use
User Interface
Final Thoughts
Overall Score 4.2