Tweagle for Twitter – Tie Your Current Location to Your Tweets

Social media has changed the lifestyle of almost all people who use it. Social media is so powerful that it is possible to stay in touch with our dear ones every second of a day, wherever they are in the world. It is up to people to harness the complete potential of social networking, to improvise their standard of communication. Wouldn’t it be nice if you could gain additional benefits by combining the features of two popular social media?

Tweagle for Twitter offers you such an advantage by combining the best features of both Twitter and Foursquare. Tweagle is an Android application which integrates Twitter with Foursquare to provide users with a location-based positioning system along with many other useful features.

A unique feature of the app is that, it allows users to hear the voice of their surroundings, for example a bar, club or festival and easily share their location through Foursquare, checking in and tweeting at the same time. Tweagle uses an indoor positioning system to accurately determine your indoor location with the help of your device’s Wi-Fi connectivity.

If you are confused about what hashtag to use at the specific event you are in, do not worry; Tweagle offers you a set of relevant hashtags based on your location instantly. One of the unique features of Tweagle is that, you can receive the tweets from people in same locality where you are through the Local feed. Users can also follow other locations, like how they follow people. Locations are like walls, where the tweets made by Tweaglers from different locations are shown. 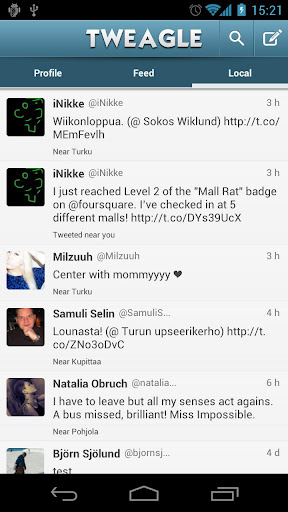 Tweagle for Twitter is a trendy app with a polished interface. It supports modern functions which Twitter freaks and Foursquare addicts will love. But at times, the tweets repeat themselves and it would have been good if there was a push notification feature. Apart from this, Tweagle for Twitter is a wonderful app for anyone who likes to post a tweet tied to their current location.

The app is available for free in Google Play and it requires an Android version of 2.2 and above.