Ted Ginn, Jr. is a prolific football player that created a big impact on the world of the NFL, but also on the high school and college leagues of this sport. Now, with only 30 years of age, this kickoff returner is a modern sports legend, so it is highly fitting that his name represents the best football game on mobile devices right now.

Ted Ginn: Kick Return Football is an app designed by the DoubleTap Software, a development company that already has plenty of experience in the domain of sports games. The app’s basic concept is to provide a sports game simulation that will grab onto all those who love the NFL or any other form of US football. Here, it is absolutely incredible how much has the DoubleTap Software team succeeded in creating a realistic simulation of the game that is both fun and based on the real sport, even down to the most miniscule details. Like Ted Ginn himself, the game is a full package that provides power, great decisions, and effectiveness, all rolled into one. 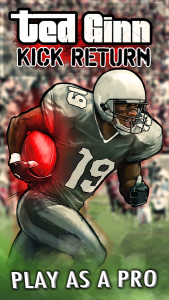 The game’s visual environment represents a top-down view of the playing field, where the players see their team and the opponents, and then decide which strategy and tactics are most suitable for attaining victory. Here, the player can choose to navigate the sidelines, go for hitting holes or delving straight into tackles. By using touch controls that are simple and very intuitive, this can be mastered in right during the first match. From a visual standpoint, the game is beautifully designed, with every player clearly visible and the overall environment rich in colors.

The game comes with many features. Instead of having a simple sports game, the Ted Ginn: Kick Return Football has the ability to earn funds with victories that are then used to upgrade the players, including their stats, uniforms and much more. The game modes feature a system of unlocking more and more difficult tournaments, making the gameplay constantly enticing. The seriousness of the design team is seen through the feature of practicing real—life football strategies. Finally, the share feature allows for the video replays of the game’s most exciting moments to be shared with friends.

The element that really makes this app stands out in the crowd when it comes to sports app is its comprehensiveness. Instead of focusing on the game itself, the management feature is blended into the mix, providing a very impressive setup that will be a true joy for all NFL fans. With the system of tournaments and player upgrades, they will have a hard time to stop playing.

Like the real Ted Ginn, this app is a wonderful addition to the world of football. With its features, strong graphics and an overall comprehensiveness of the game, Ted Ginn: Kick Return Football is a sports game that simply shines with quality.