I used to keep my favorite apps in the homescreen to launch them with a few taps. That was easy, but I looked out in the Android Market to find a still more convenient way. I found an app – iSwing and I think, this app is one of its kind. Let me review it today.

iSwing is a simple Android app that makes launching favorites apps so easy. To launch an app, all the users need to do is just swing their iPhone. Yes, it is really that easy. After installing this app, users need to setup swing movements for their favorite apps. They can assign apps for four types of swing movements under three types of position – flat, upright and sideways. 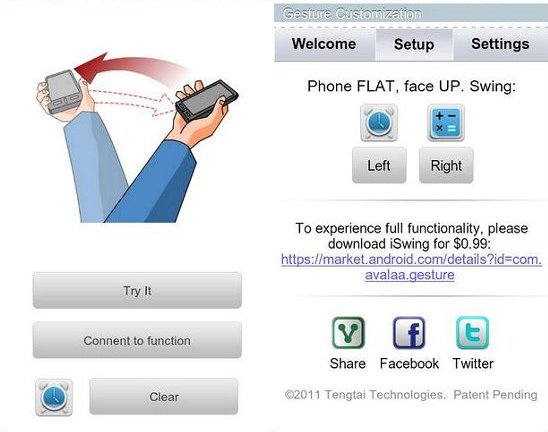 After launching iSwing, users need to start assigning ‘swings’. They can do it from the Setup section of the app. This app depicts all the swing movements with diagrams to make it easy for the users to understand. After selecting the function, they need to tap the ‘Connect to Function’ and select the app to assign. They can also disconnect the app from the ‘swing’ by tapping on ‘Clear’.

To avail the swing function, users need to leave it running in the background. It means, users should not kill the iSwing process with the task killers. Users also need to be careful as they might drop their device in the process of swinging it.. 🙂 Apart from that, iSwing looks fine and works without hiccups.

This app is compatible with Android 2.1 and up and it costs US $0.99. There is also a free Lite version available for this app. The paid version can be used for 12 apps, while the Lite version supports only two types of swing movements. If you like to give a try before purchasing the app, you can certainly install the Lite version.

Solitaire by Brainium Adds Colors to the Classic Game