Super Speed – Optimize Your Smartphone’s Performance with One Click

Smartphones are best known for their speed and intelligent working. But you must have noticed that your smartphone slows down after substantial usage. What would it be like if you could enhance its performance with an app? Super Speed is an app that optimizes Android mobile operations and increases its speed of functioning.

Super Speed is an Android app that helps in optimizing your mobile’s speed and performance by eliminating junk. This greatly improves the three sections of your smartphone – its cache, system settings and processes, to make it work faster. 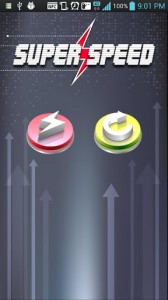 Working of the app:

When you download Super Speed it gets installed as a widget. It provides you with a ‘process manager’ widget that regularly manages unnecessary memory. As the name says, with just a single click the widget gets its work done. Your phone’s memory usually gets flooded with apps, downloads and cache files. Cache files are temporary files that are created while downloading apps, visiting websites and using the Internet for other purposes. When these cache files increase, the speed of your device comes down, its performance is affected greatly and space becomes a constraint. Super Speed boosts the performance of your smartphone by removing those temporary unwanted files. 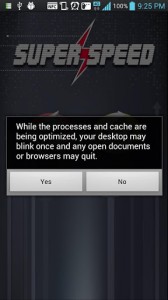 Super Speed solves cache and process issues and prevents your device from getting indolent. It is a speed booster that helps in updating and improving your mobile’s performance and compatibility. Although the app has great utility, I faced a lot of difficulty while using it for the first time. A good tutorial would provide a better understanding of the app’s concept and its working. On the whole, Super Speed greatly helps in improving the speed of your device.

Super Speed is a paid app costing $0.99 and requires Android 2.1 or later versions.

Viatun 4 VPN – Save Money on Your Internet Data Plans