Well all that I could say for this app is that it was made with the best intentions in mind, but served its purpose a little below the bar I would say. The comment made is not to criticize the efforts of the developer but as a fact, it just happened to be true. Though there were many feature that they worked on to serve it’s purpose, there were several other draw backs that pulled it down. The app destroys alarm clock commands, battery drops 40% faster than the usual before the app was installed, and the space occupied for an app of such a simple task is just too much, which is more than >4 MB. Well, nobody’s perfect, so lets cut them some slack and look into the positive aspects of the app. 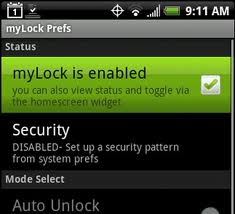 Well the app “myLock” was basically designed to enable quick unlock for incoming calls and touch screen locks during calls. The “Quick unlock” feature enables automatic unlock of the phone when a call comes in by passing the unlock slider. Then there’s the “In-call touchscreen lock”, which prevents face dialing/muting/hangup , which many of us have to admit that we face and it would be a lot better to have an app that would prevent that. Wouldn’t you agree?. The added advantage is if you need to use the screen during the call, all you need to do is press the trackball/camera button. Now its not that bad, isn’t it?

You would have definitely experienced this, there are times when you would accidentally touch the screen and make a call unawares to you, sometimes you may accidentally pick up a call that you would like to avoid, or even the worst cut a long awaited call by accident. These things do happen on a daily basis and we have got to admit to it. To put an end to all these inconveniences, they have come up with a feature that’s called Incoming call prompt, which prevents all the above mentioned mishaps.

Some tips that will help you continue to use this very efficient app without its drawbacks would be, first of all disable the app before you use the alarm on your phone. It would be best to remove any other task killer apps if you have them. Make sure when your phone goes to sleep, none of your large memory space apps are opened as the unlock would take longer if you were to allow it to happen with huge apps opened. However this effect is not caused on all mobiles, it depends on the kind of device that your using. So with these tips you could make apt use of the “mylock” app with out much trouble. However we all still look out for the updated version of the app.

Sakura Pro Live Helps You Add Colors to Your Droid