Although the Galaxy Has Advantages, Lenovo Wins!

Putting these two phones head to head and one would think that they are fairly even. They are not. In a battle between the Lenovo K3 Note and the Samsung Galaxy Note, the Lenovo wins hands down. Why? There are a few reasons.

The pixel resolution is far better on the Lenovo Note (1920×1080 px vs1280x720 px for the Galaxy) and the phone produces a slightly sharper picture. Why? Because the pixel density is way better (401ppi vs 267ppi) and the Lenovo has three sub-pixels per pixel. In short, it’s got even better graphics in real life than the better graphics it has than the Galaxy on paper, and that includes better video processing. 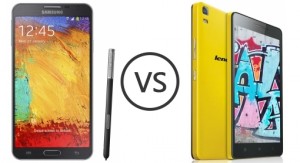 In this, the Lenovo is keeping up with the times featuring the increasingly-standard octa-core processor versus the Galaxy Note’s quad core processor (it’s 8 x 1.7 GHz vs 4 x 1.3 GHz for those curious), yet even if both were using quad core operations the Lenovo completely beats the Galaxy hands down. The Lenovo also has a more powerful camera than the Galaxy note, meaning that the better resolution is put to very good use.

In this, the Samsung beats the Lenovo by about 3-4% battery life, which is very good. However, besides having a slightly better removable battery, what’s the advantage?

Verdict: The Lenovo Note, hands down, has won this battle of the phablets. With better processing, graphics and device specs, it’s simply an overall more fun phone to use and ultimately work with in general.