Arranged Marriage: Can You Escape Your Planned Matrimonial Predicament?

There is no scarcity of runner game apps available in both the Google Play and Apple App stores. Indeed, this fact just goes to show how popular these kinds of games are. But, while many are being released on a regular basis, only a handful ever reach the status of Classic. This is because, with that much competition, developers are challenged to make games that would stand out. One such game is Arranged Marriage. 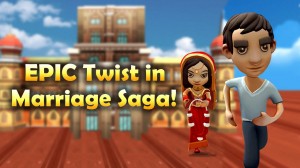 First, the concept. Who would have thought that you can make a runner game out of something as serious (and vile) a social issue as nonconsensual arranged marriage? From this alone, the game is bound to immediately capture any person’s attention, gamer or otherwise. That, plus the subtle humor that its developers obviously intended in the game’s entire concept only makes Arranged Marriage really worth giving a try.

The objective of the game is to evade, for as long as you can, your planned partner. Along the way, you can collect coins and power-ups to help you in the long run (pun very much intended). You might also encounter a horse as you progress, which you can ride for a significant speed boost. Power-ups come in the form of Coin Power-ups (multiplies the number of coins you get by 2), Shields (makes you immune to debris and obstacles that you encounter), Magnet Power (automatically absorbs coins for you), and Hen Power (boosts your horse’s speed).

If you’re a gamer who is very much familiar with other runner game apps, you’d probably notice that many of the features of this game are very similar to such well-known runner games as Temple Run, but with very noticeable differences and twists. Also, in this game, you have the option to challenge your friends. 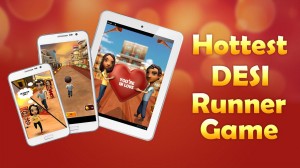 From the facts stated above, what evidently makes Arranged Marriage unique from numerous other runner game apps is the twist that it introduced. Very few runner games could boast of being able to present something fresh to what is already an overused concept. While many of its features are heavily borrowed from other runner games (let’s face it, these features are what really define these types of games), the notion of running from your virtual arranged partner, as silly and ridiculous as it seems, is what ultimately makes it fresh and enjoyable. All the more so, if you can play it with friends.

It’s not just for laughs, though, for the developers themselves have stated in their blog that one of the reasons for the conception of the game is their serious advocacy in taking an “unabashed stand against the evils of society like dowry” and nonconsensual arranged marriage. This fact only makes this game that much more likable and worth sharing.