Mad Dragon Defense is a fun game for Android targeted to players who love action titles. The game starts by putting players in the skin of a dragon with 4 heads. Each head is controlled separately and serves a different purpose. Furthermore, there are endless campaign levels to discover and fierce new enemies which keep on coming with every level. There are also powerful boss fights which are thrown into the battle once every 10 levels or so. This gives players the opportunity to exercise with controls and learn how to master the Dragon defense. 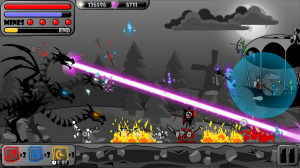 The dragon that is featured in this game gets to be controlled by the player. There are 4 separate heads that needs to be controlled, and they get unlocked as the levels pass by. Each head serves a different purpose, for instance, the first head shoots flaming balls toward opponents, second head shoots freezing arrows to damage air units, third head sends air bombs and 4th head shoots laser rays designed to burn everything in their path.

– Over 50 Levels to Explore

The game contains over 50 levels in campaign mode as for players to explore, and new levels are added daily. Some other levels are also available such as ones to get extra Souls, and there are also ones that go in Endless mode and players have to destroy everything in Dragon’s path.

Various upgrades can performed from the in-game menu, these being designed to increase power of the dragon and allow for more destruction (either overall or for each head separately). These upgrades can be bought with in-game currency, earned throughout levels. In addition, there are various mission helpers, which help the dragon, such as Mana Replenish, Life Replenish and Time Stop. 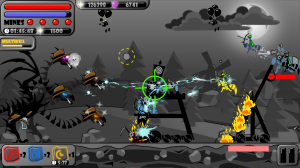 – Unique Items to be purchased

The store has some cool unique items available for players, such as wings, helmets, protective covers and more. These can be bought with gems and souls, which have to be earned by the player in a long time or purchased from the store. Also to be mentioned that the Dragon runs on energy, and after 8 levels or so the energy will be depleted. It takes 10 minutes for each energy point to be replenished, or one can purchase full energy from the store.

Players have the possibility to save their current progress by logging in with a Google Play account. Then, all progress is saved automatically and can be retrieved on other devices. In addition, players are able to share scores on social media with ease thanks to a dedicated feature. Conclusion Mad Dragon Defense is truly a great game for those who love action and are willing to control a mighty dragon. It is available on Play Store for free and is compatible with most of the recent devices.