RPGs would always have an undying appeal among gamers. It’s for this same reason that competition in the field is extremely high as well. New concepts would have to be discovered in order to keep gamers hooked. Part-Time Hero: Monster Mayham takes role-playing games to new heights by introducing a monster killing app that focuses on consistent battles and stage-clearing, complemented by real-time upgrades and hiring of helpers.

Once you launch the game, you would be automatically be given a walkthrough of its various features. You would also immediately notice that the hero is constantly on the go, and the monsters are not facing him but are actually running away from him. For this is one of the unique aspects of this game: your job is to simply hunt down and kill a specific number of monsters to clear stages. 1 chapter consists of 10 stages, which, in turn, contains 10 waves. 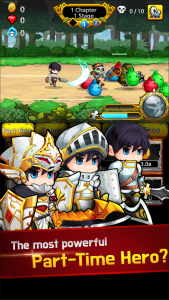 Tapping the screen causes your hero to attack the fleeing monsters. Each has a green health bar, determined by the type of monster it is. Most take the form of archetypical monsters like skeletons, werewolves, dragons, slimes, orcs, and much more. Once you kill a monster, you would be given coins, which you can use to upgrade your hero and his equipment or hire other helpers. Helpers range from quintessential classes like the knight, wizard, thief, archer, and monk. Interestingly, they’re all female and each has her own unique attack, which is entirely automatic.

As you attack the Raze bar fills up, which once full, would allow you to unleash a devastating attack that you can power up. Killing monsters also make it possible for you to unleash different types of skills like the Blade Storm and Electric Shock, which deals great area-of-effect damage to monsters. Not all skills are activated as you can upgrade the passive skills of the hero as well. Passive skills increase the hero’s critical chance and coins dropped by monsters.

Take note that there are three types of currencies in the game, namely coins (for basic upgrades and helper purchases), red gems (for upgrades as well and permanent bonuses from the Shop), and monster souls (for strengthening your helpers). 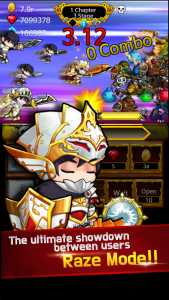 Part-Time Hero: Monster Mayham noticeably capitalizes on a single aspect of action RPGs, namely the part where the hero and his companions could vanquish just about any monster that crosses their path. This is a rare sort of RPG where, regardless of your actions, your victory is assured (the automatic body tackle skill makes sure of this). And this could not be more apparent from the fact that the monsters are actually fleeing from your party.

It’s this very aspect that serves to make this RPG app stand out from its other contemporaries. Yes, there may not be much of challenge battle-wise, but the non-stop action (with tapping and skills activation) and added bonus activities (e.g. part-time jobs, upgrading your hero and his helpers, collecting treasures, etc.) is sure to entertain any RPG lover. And competition is rife, due to the fact that high scores determine your world ranking.