Run for Cheese – A Simple but Brilliant Endless Runner

With the Run for Cheese game, Atelier 801, the mobile device development team behind this app, obviously decided to take the idea of an endless runner and advance it significantly both in terms of engagement and diverse game mechanics. Even though this field of mobile games is really crowded with a constant stream of games, Atelier 801 managed to pull off a familiar, yet completely fresh take on the same genre of arcade releases.

Run For Cheese was created for the Android devices, and can be downloaded from the Google Play service. It requires an Android operating system 4.0.3 or a later version to be installed. In its basic concept, the app represents a running arcade game which is enhanced by a multitude of different add-ons. But, the core notion presents a story about a brave shaman mouse that is tasked with feeding its starving race by gathering as much cheese as possible. Confronted with the possibility of his loved ones suffering, the same shaman mouse sets off on a huge, marvelous and dangerous adventure spanning across many levels filled with an exceedingly fun gameplay. 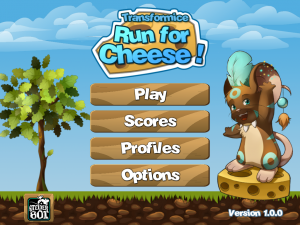 The game comes with an impressive array of features and special elements which make this running game a real small gem. The essential gameplay includes the mouse running and jumping from platforms, collecting cheese and avoiding enemies, which is all controlled by a single touch command. This feature will make the game appealing to all ages and its learning curve will be exceedingly fast for all who try it. The basic gameplay is enriched by power-up which will provide features like invisibility, endless jumping strength, and a cheese magnet, just to name a few. Of course, these will often be needed because the game comes with plenty of obstacles and enemies, which will all try to stop the shaman mouse in its track, testing the reflexes and the strategy of the players.

For competitive players, the feature of making the biggest scores, challenges and achievements will all make the game even more appealing. The feature of language support, covering 15 languages from English to Norwegian, Russian, Brazilian Portuguese and Spanish will allow it to cross all borders, while a feature of customization allows players to change their environment and win specialized tiles to make their own unique game surroundings. 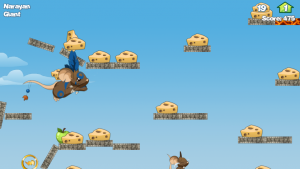 But, it has to be said that the thing which separates this game from similar endless runner releases are its hidden game modes. With them, players can unlock things like the flying mode, diabolic mouse, greedy mode and much more, all located in the same game. While many endless runners have a tendency to bore their players, Run for Cheese and its modes provide a huge boost to its ability to captivate players for a prolonged period of time.

As an arcade runner, Run for Cheese streamlines the concept of this type of games. Its rich features, simple controls and especially hidden game modes will make it a true fun package for all those who install it on their Android device.