I’m sure you have seen the movie, Avatar. Did you have fun?? Well,  I was thrilled. The movie was very moving and also had a moral to it, about saving the natural resources of the world and what would happen if we destroyed it. The movie was just great and I liked the  level of imagination with which it was written. The story was brilliant, the animation was cool and the designing and everything that the movie had was just awesome. I have not experienced any movie like that before. 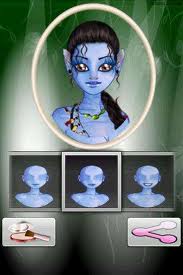 rel=“nofollow”>
Well, being such a great fan of the movie, I just had to see what they had on this app, Avatar makeup. The app is made specifically to help individuals create their own design of an Avatar character. The app is fun and you could take your chances exploring the various facial features that the app provides, to help you create different characters.
My little girl is five and she loves the app, She has been so obsessed with the movie that she has a collection of Avatar toys and now she just loves making characters of her own. And she is so proud when she completes her master piece. I encourage her at it as it gives her a sense of accomplishment. I intend on channeling that in the right direction to help her accomplish greater things in life.
The app has a face, that needs to be completed.  Next you have your make up tools, for the mouth, the eyes, eyebrows, eyelashes and more. You fix them up and you have your Avatar character. The master piece can also be saved in your photo gallery  as a wall paper and also shared on Social networking sites. I have shared Kim’s masterpiece on Facebook and she has got a number of comments from friends and family which have a positive impact on Kim’s learning. This app is simple but has helped little Kim learn something about achieving.