You must have tried your hand at playing plumbing games where you have to connect a series of pipes, redirect the water flow, fix leaks etc. MegaFlux is one such new entrant to the Google Play store that comes with a lot of challenges that test your logical thinking. What you have to do is power a big processor using the flux of the right color.

What’s the app about?

MegaFlux is a puzzle game that tests players’ organizing ability. The game consists of colorful pipes called Nano-Pipes through which flux flows. The idea of this interesting game is to turn the Nano-Pipes in the right direction and make the flux flow into the processors. The app comes with more than 50 challenging levels. 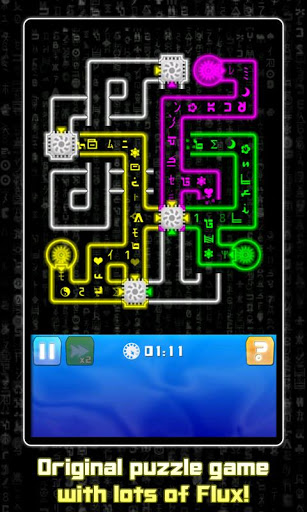 How does the app work?

MegaFlux consists of two main categories, namely Relax Mode and Challenging Mode, with a number of levels. The game is filled with many Nano-Pipes that are interconnected. You have to tap on the Nano-Pipes in the proper order to direct the flux of a particular color into the right processor. By clearing each level in the game you get comments like Well done!, Nice! and You did it!, which motivate you to play the game with more enthusiasm.

You score points according to the time you take to complete a level. You can earn a maximum of 3 stars according to your performance in each level. You can play a level as many times as you like till you attain all the stars. It may seem easy, but remember that things get tougher when you progress to advanced levels. You have to put in all your efforts and concentration to increase your score.

Special features of the app:

The tutorial option of the app contains a step-by-step description that is quite helpful for first-time users. MegaFlux awards you with 66 medals according to your performance. Using the Editor option in the app, you can craft your own levels and make the game more challenging. The pleasant music adds value to the app. You can compare scores with your friends worldwide by making use of the Scoreloop profile. I felt that the banner advertisements in the app were quite a distraction. It would be of help if the developers reduce it in their version update.

MegaFlux is a fascinating puzzle game with great retro graphics and can engage you for hours together. It is a free app that requires Android 2.2 or later versions.

Words And Rockets – Fire Words and Boost Your Score