There are a lot of applications that can be installed in your android phone. But you cannot afford to miss the Puzzker android application.

Puzzker android application is combination of an entertaining puzzle and a game. This game is one of the best games that you can install in your smart phone. One of the most interesting things about the game is that it is very simple to play. To play the game requires that one lines up the cards in either a vertical or a horizontal manner so that the player can create the hands of the poker. This is very important in ensuring that the objectives of the game are met. It also assists in ensuring that tons of tokens are gained. 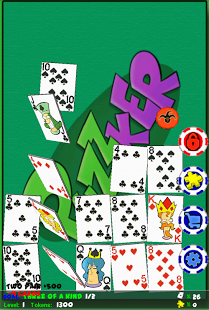 The game has three difficulty modes. These modes are put in the application to cater for the interest of those who have gained enough experience on playing the poker and they still have an interest of learning more. Puzzker application is compatible with many devices which include tablets, Smartphones and android 2.2.

Puzzker application does not require accessibility to the internet. This makes the game to be less costly as compared to many other games which require one to access the internet for him or her to play that game. However for the high scores, the game has to be supported with internet connection in order for the player to be allowed to play the game. 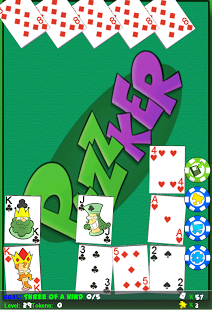 The game has 3d graphics which ensure that the scene of visibility by the viewer is a pleasing one. There are also beautiful drawings which are found in the application. The drawings are designed by Alex A, who has a lot of skills in making pretty drawings.

Although Puzzker android application has got very simple rules, the challenge which is associated with this game is a big one. Puzzker is one of the most addictive games and it consumes a lot of time. That is why it is advisable that those who play it should program their time well.