Over the past few years, car racing games have become a huge favorite among mobile gamers. This is due to the fact that these apps can bring the fun to anyone even while they are on the go. Now, if you are looking for something with a new twist then you should give Crazy Road a try.

The app game is basically a racing game that you can play on any Android-powered device. One of the obvious things that make it different from its counterparts is its graphic theme. Unlike the more popular racing games such as Racing Fever and Real Racing, Crazy Road doesn’t feature realistic looking cars. The game lets you race with Lego-like cars that can entertain its players in the most creatively unique manners.

While the game does not have high definition graphics, the simplistic and colorful world of the game make it an eye-candy for every mobile game players out there. It includes a city-like environment that gives you the feeling of participating in a street racing even. Having minimum resource requirements, this game can display its maximum graphics on any Android phone.

Crazy Road is more than just about winning the race. Aside from being ahead of your opponents, you will also have to avoid getting caught by the police. But don’t worry, you can unlock new cars and play Gatcha by collecting coins along the way. By winning enough races, you can become the best racer in the world. 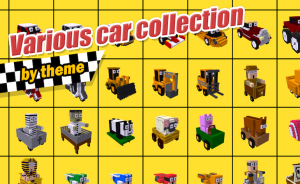 If driving in different places is your cup of tea then Crazy Road is for you. The game features a wide variety of racing themes that you can choose from with each theme based on different characters of the game. You can unlock new themes as you unlock new characters. Once a theme is unlocked, you are free to race in it.

In the game, you can control your race car by swiping left and right. In addition to that, you can also make your car jump by swiping upward. With its controls, you can take your crazy driving skills on any road.

A racing game wont be that much thrilling if you cant upgrade your car. This app lets you upgrade your car in a unique way, by collecting puzzle pieces. For every puzzle piece that you get, you can get an upgraded car. Play the game regularly to get more upgrades.

If you want to play a different type of racing game then Crazy Road is for you. To play the game, simply download it from Google Play store and have fun. Also, feel free to share the game with friends and family.