Mars Attack Free is a fun arcade game which can be downloaded free from the Google Play store. Granted the free of charge download, various ads will be displayed while playing the game, however users can get rid of them by paying a small fee. During this app review both premium and free versions were tested and they both felt pretty much the same in what regards the fun factor.

Due to the fact this is an arcade game, it also features a High Scores section which enables a lot of competition between friends playing the game or better yet, arcade game fanatics. 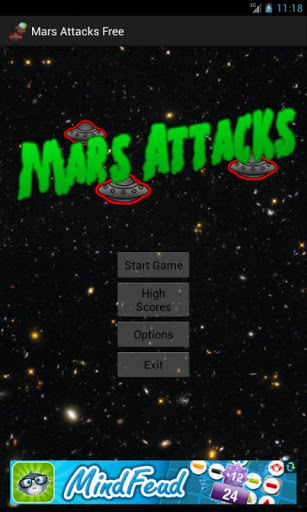 The player starts with planet Earth (encircled in green) which needs to be protected from alien invasions. To do so, players have to tap on the aliens as soon as they appear on the screen and once they do so, they’ll be zapped into space dust. There are 3 green circles (shields) protecting the Earth and once they are destroyed, the planet becomes vulnerable to the Martian attacks (one may gauge this by the invader’s spaceship color, which is red).

There are no powerups in the game and nothing is happening there other than the intensity of the ships. So basically, as one will progress through the game, the number of invaders will increase and so will their speed. 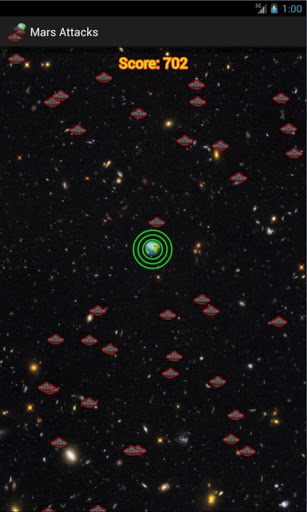 Graphics are good and they are reminiscent of the retro arcade games which many players still fully enjoy. This feature of the retro style arcade games also resonates in the single variety of enemy units, green lasers and background. This is not necessarily a bad thing, because it allows the player to stay focused more on tapping the enemy spaceships and keeping the Earth safe, without being concerned with different enemy colors, spaceships and so forth.

Controls are very elementary which is vital for such games. They involve the player just tapping on the enemy in order to keep it away from reaching the Earth and destroying one of the 3 green protective rings around it.

Overall, Mars Attack Free is a fun arcade game to play which is basically a bargain at the free price tag the premium which is just a bit more. With its fun and addictive gameplay, it can ensure many hours of fun tapping the enemies and ensuring the Earth is safe from the alien invasion!