Flags of the World App Review

The Best Quiz Game for All Flag Buffs !!

Many of us have always been trivia and quiz game connoisseurs. While the traditional version of these games takes the form of a simple question and answer, many variations have been introduced to it with the passage of time. One of these is the use of image clues instead of worded questions. Flags of the World – Quiz Game, with its undoubtedly straightforward title, is a quiz game that focuses on testing the player’s knowledge about the different flags of the world, with only the images of the said flags as clues. 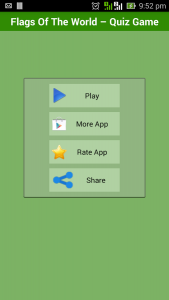 The interface of the game is very simple. Upon starting, the player is automatically taken to the main menu where there are four options: Play, More App, Rate App, and Share. The first button immediately starts the game. ‘More App’, on the other hand, takes the user to a list of the other apps that the developer, App Appa, has made. ‘Rate App’ and ‘Share’ are pretty self-explanatory as these options let you leave your rating of the app on the Play Store and share the app on various forms of social media and third-party messaging platforms.

As for the actual gameplay, many players who have played the hit game ‘4 Pics, 1 Word’ would probably recall the similarities between it and this quiz game. Flags of the World – Quiz Game also makes use of in-game currencies, which the player can earn and use to make solving the current image much easier. 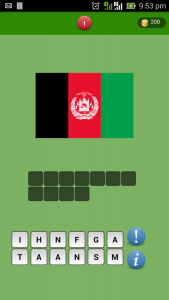 An image of the flag will appear and set directly below or it are blank boxes, which correspond to the number of letters of the country that the said flag belongs to. Situated under these are jumbled letters, which the player needs to arrange on the said boxes. Once he has figured out the answer, the player needs only to tap each letter consecutively, so as to spell the name of the country correctly on the boxes.

If he has a difficult time solving a specific flag, then he can opt to spend the gold coins that he has to gain clues in solving it. Next to the jumbled letters are two symbols, an exclamation point and an info symbol. The first shows a correct letter on one of the boxes, costing 8 coins, while the second reveals the capital of the flag’s country for 20 coins.

There are undoubtedly many apps that have a similar concept to Flags of the World – Quiz Game. What ultimately separates the game from others, which, more or less, share similar features are the apparent straightforwardness of its interface and gameplay. Additionally, the hint option that reveals the flag’s capital is also a unique feature that this app has certainly integrated extremely well. The developer’s decision to adapt the style used by ‘4 Pics, 1 Word’ is a wise move, as it is an element that a lot of quiz game players have already gotten used to in quiz game apps that utilize images as clues. Overall, a game that flag buffs should not miss out on.