Prove How Sharp Your Memory Is in This Classic Game App

Memory games take many forms, but there is no denying the fact that memory pairing games are one of the most popular types of such games. Not only are they an entertaining way for you to spend your time, but they also help enhance that aspect of your brain as well. Memory Game for Kids – HD may have been designed to target a younger audience, but for its outstanding graphics and intuitive design and features, it is guaranteed that anyone, regardless of age, wouldn’t find it hard to like the game due to the said reasons. As to why this is so, each of the said features will be fully analyzed in this review. 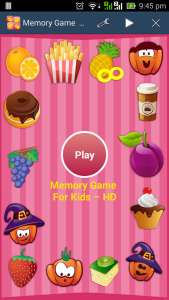 First, let’s tackle graphics. Indeed, the HD quality of this game’s visuals could not be more emphasized. Android games with cartoon-quality graphics rendered in HD are always a proven eye-candy for most gamers, as was in the case in classic hits like Plants VS Zombies and Where’s My Water. Memory Game for Kids – HD takes advantage of this and employs visuals that people, especially kids, would easily warm up to and not get tired of. And, since this game is obviously a game whose success relies a lot on the imagery that it utilizes, its crystal-clear graphics is really a big plus.

As for the gameplay aspect, those who are familiar with memory games would not take long to familiarize themselves with the mechanics of this app.Upon tapping the ‘Play’ button, players are promptly given a 6×4 grid to solve and complete. Instead of cards, though, the game makes use of images.

Depending on the chosen theme, gray, static images of the four available themes fill the grid. Upon tapping a gray image, a ‘step’ is taken and the hidden image will be revealed. A step consists of one chance to reveal and memorize two cards; if two . The number of steps that you take ultimately determine your high score once you’ve completed the grid. 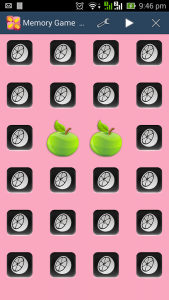 In the settings menu, the player can change the theme of the images according to his preference. The four categories available are Fruits, Mask, Games, and Snacks; all of which make use of images that suit the game’s target audience. It is also in this window that one can reset the high score and toggle the sound on or off.

Memory Game for Kids – HD may have a lot of features, which are similar to most memory games in the Play Store, but it is ultimately its simplicity and straightforwardness in gameplay and design that makes it entirely different from other related apps. The possibility to choose from four available image themes is also a distinctive factor, as well as the ability to set, compare, and reset high scores.

Lastly, the overall speed with which you can easily access and start playing a single round is outstanding, to say the least, and is very important, especially for kids who have a knack to put down games that they can’t play as soon as possible. Indeed, this is a factor, which is often by overlooked by most apps that, for all their sophisticated graphics and cutting edge effects, take a long time to load.